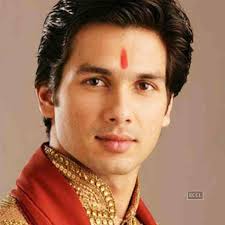 Shahid Kapoor, whose pre wedding function was done at five star banquet in delhi  have set the internet abuzz is set to tie the knot with his 21-year-old-fiance Mira Rajput a local delhi college  girl on Tuesday 7-7-2015.
Actor Shahid Kapoor and his bride-to-be Mira Rajput had a big fat Punjabi sangeet in Delhi on July 6 with lots of dancing, glittering outfits and merrymaking with Bell theme decoration.

Shahid looks charming in a red Kunal Rawal kurta, pajamas and bandhgala ensemble while Mira looks beautiful in a lime yellow Anamika Khanna lehenga.
The actor left for the wedding which is taking place in Delhi five star venue on Monday to be a part of the initial functions.
Though several Bollywood actors are expected to attend the much awaited wedding, the details of the event are still kept under wraps, increasing everyone’s curiosity much more.
The first picture of Shahid Kapoor and Mira Rajput at their sangeet. Image courtesy: Twitter @RohanShrestha 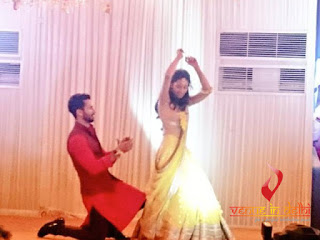 One of the people attending the ceremony was photographer Rohan Shrestha, who is a good friend of Shahid Kapoor.
He tweeted a picture of the couple dancing on Twitter and captioned it ‘kill it SK!’. The tweet which has more than 200 retweets shows the Bollywood actor matching steps with his wife-to-be.
According to a Mid-Day report, Shahid Kapoor’s hit songs including ‘Dhating Naach’, ‘Tu Mere Agal Bagal Hai‘, ‘Sari Ke Fall Sa‘, ‘Mauja Hi Mauja‘ and ‘Raat Ke Dhai Baje‘ are featured on the playlist.
Makes us wonder which song are the adorable couple matching steps to?
The picture which is the first official picture of the couple together has already gone viral with people sharing it all across social networking sites.
All in all, we can’t wait for more pictures!
Kill it SK!